These states could still legalize recreational or medical cannabis in 2021 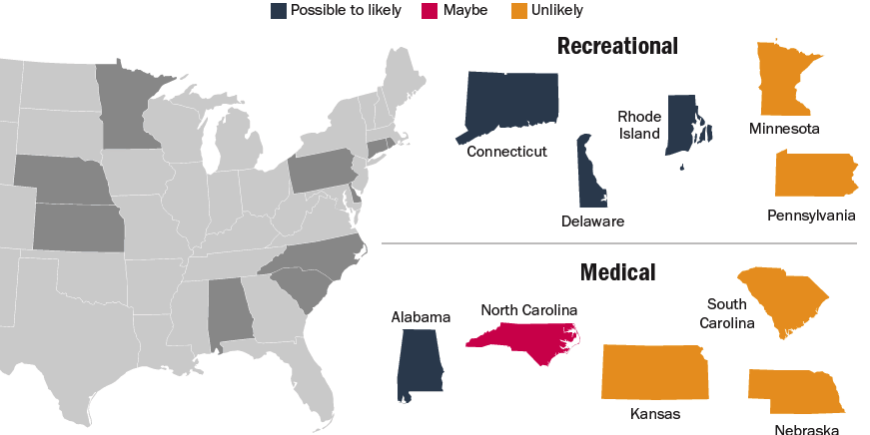 Possibly generating hundreds of millions of dollars in new business opportunities in the coming years.

Now that New Jersey and New York legalized recreational marijuana programs – which together are expected to produce more than $4 billion in annual sales within a few years of launching – industry experts are keeping a close eye on the East Coast states of Connecticut, Delaware and Rhode Island.

Virginia and New Mexico already legalized adult use through their legislatures this year. Together these two states are expected to generate around $2 billion in annual revenue five years after sales begin.

It’s uncertain which, if any, additional state legislatures will actually pass bills this year given that political dynamics can shift rapidly.

For example, Connecticut seems a bit less likely to do so than a couple of months ago, industry experts said.

Pennsylvania and Minnesota remain in play to legalize adult-use markets as well, but passage appears unlikely.

Alabama looks most likely to legalize MMJ at this point, industry experts said, noting that a measure has passed the Senate and now is going to the full House.

North Carolina became a maybe when the chair of the state’s powerful Senate rules committee submitted a bill.

Texas is another state to watch: It already has a limited medical marijuana program, so MJBizDaily doesn’t classify it as a full-fledged MMJ state. But it could get a significant boost from lawmakers this year.

A state House committee advanced a bill that would increase the THC limit from 0.5% to 5% by weight and add qualifying conditions such as chronic pain and post-traumatic stress disorder.

More than two-thirds of Americans support recreational legalization, according to a Quinnipiac University national poll of adults released this month.

“Now that 40% of Americans live in a place where marijuana is legal for all adults, the pressure is on lawmakers at every level to act on the will of the people,” Wolf wrote in an email to MJBizDaily.

“The more states move on legalization, the more out-of-touch states that are left behind appear,” O’Keefe added. “Marijuana stores near state borders have parking lots full of license plates from their prohibitionist neighbors.

“It’s a very clear illustration of the economic growth that states are ceding to their neighbors the longer they fail to listen to voters.”

State lawmakers are attracted to the tax revenues, jobs and general economic development that legalization brings.

The coronavirus pandemic, which has strained state budgets, also has put additional pressure on some state lawmakers and governors to act.

A ‘heavy lift’ in some states

But O’Keefe noted that while legalization momentum is strong, “it remains a heavy lift in state legislatures.”

It might surprise some that prospects for medical marijuana legalization appear strongest in Alabama.

The Alabama Senate has passed a bill three years in a row. Last year, coronavirus derailed the possibility of a House vote, but this year two committees have advanced an amended measure to the full House.

“But if you are a supporter and advocate of medical cannabis, it’s hard not to be encouraged by the fact that there seems to be momentum behind the legislation. That’s a huge step that a lot of people wouldn’t have thought possible a year or two ago.”

Here’s a look at the bills in states most likely to pass measures this year, and some key business aspects of the bills. Much of the information is provided from bill summaries produced by the Marijuana Policy Project.

Most likely adult-use measures to pass

House Bill 150, advanced by one House committee and now before Appropriations, which could advance the legislation to the full House: