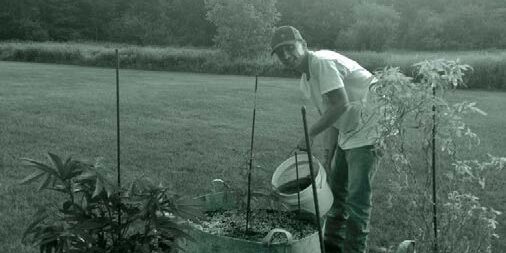 Greener Pastures Recovery, located in the State of Maine in the U.S., pioneered its use of PAT, Plant Assisted Therapy, for addiction recovery (Weed World, issue #139) with a 99 percent success rate – which is unheard of in the addiction recovery industry – reporting a 40 to 60 percent relapse rate in the U.S. alone.

Ronald Figaratto and his wife, Roxanne, opened the home in 2016, 25 years after Ronald successfully transitioned off of crack cocaine using cannabis. Figaratto became an expert in growing cannabis, then became a caregiver under the Maine Medical Marijuana Program (MMMP).

Opening Greener Pastures Recovery was a direct response to the national opioid crisis, after the couple lost a loved one to a Fentanyl. Patients served reported a reduction in opioid use after adding cannabis, further spawning the idea of a recovery house with cannabis as the cornerstone of transitioning.

“As we began to help more of our patients find recovery through cannabis therapy, more people began to seek us out for help,” Ronald explained.

Many of the patients involved in Ronald’s caregiving program had been heroin free for years, after receiving methadone but, with doses dramatically increased over the course of five to 12 years, Ronald said they still felt addicted, albeit, to methadone.

The Grass is Greener

Thirty-six year old, Eric Loyd, has lived in the state of Texas for 25 years. When he was 19 he broke his back in a car accident. With no health insurance, he said he had a hard time finding help with severe chronic pain.

“No doctor wanted to prescribe me effective pain medications, because I appeared to be young and healthy,” he explained. “They only gave me mild pain killers, like Ibuprofen, hydrocodone, codeine, tramadol – and many muscle relaxers. By the time I was 24, I was suffering pretty badly, was taking too many pills and I became addicted. When I tried to stop on my own, I went through withdrawals, and ended up at the methadone clinic.”

After about a year, Loyd said the methadone wasn’t touching his pain, even after becoming addicted, so he transitioned off with Sub Oxone, a commonly prescribed pharmaceutical used to replace methadone, OxyContin, and heroin.

All through this progression of addiction and transition from methadone, Loyd said he smoked cannabis, stating it worked well with the Sub Oxone, but in his conservative State of Texas, weed was taboo.

Per a study done in San Francisco with AIDS patients using cannabis for pain in tandem with pain killers, a 25 to 30 percent pain reduction was noted, proving cannabis as an enhancer. Patients on pain pills and still have chronic pain, and cannabis helps just by smoking. Ingesting cannabis has been found to replace the pills altogether. Greener Pastures Recovery’s PAT uses a combination of plant-based remedies with great success.

By the time Loyd was 33, he was arrested for cannabis possession on three separate occasions. Each time he was holding just one or two grams, but in the conservative State of Texas, it meant jail time and fines.

“I had to stop using cannabis due to my legal concerns, and I stayed on the Sub Oxone for years” he continued. “I tried to stop using Sub Oxone more times than I can count, but never got past two weeks, until I found kratom.”

Kratom is derived from the leaves of an evergreen tree, Mitragyna speciose, related to the coffee plant, found in South Eastern Asia, where it’s been used as remedy for thousands of years. Used as both a sedative and a stimulant, Kratom is said to be successfully used for pain and anxiety. Loyd said it allows him to focus and emotionally connect with people – something he couldn’t do on the Sub Oxone.

“I had been taking the kratom for about a year or so, when my ex-wife’s family – who we’d been living with – decided that kratom wasn’t acceptable, and if I wanted to love there with my ex and son I had to stop taking it. They made me feel like there was something wrong with me, so I decided to ask for help – that’s when I found Greener Pastures.”

Like cannabis, kratom is said to be a “mind-altering” substance, and is banned in several states in the U.S. Like cannabis, the anecdotal stories are hard to ignore, especially in the face of the global opioid crisis, and the help it seemingly provides.

Once arriving at Greener Pastures, Loyd said he was offered a treatment plan customized to what he needed – with micro-dosing cannabis, with other plant-based remedies the core of his treatment.

“The people at Greener Pastures are some of the most empathetic, positive, and warm souls I’ve ever met,” Loyd shared. “The staff was always available to talk – but, more importantly, I came to know myself more, and accept myself for the person I am.”

Ironically, Loyd found that both kratom and cannabis were part of the treatment program at Greener Pastures, allowing him to keep off the Sub Oxone for good.

At home in Texas, he still isn’t able to freely use cannabis as remedy, but he always keeps kratom in stock.

“I take kratom everyday – at least 20 grams total throughout the day, four to five grams at a time,” he shared. “I wish I could use cannabis with it, as it’s very effective – but Texas is still in the dark about using it as remedy, let alone as part of my recovery.”

While kratom is still unknown to most of the population, Loyd said he talks to anyone who will listen about both kratom and cannabis to replace addictive substances, sharing how kratom has helped him with elevated mood, relaxation, and sleep, in much the same way cannabis does.

“Most are skeptical – I was skeptical,” he laughed. “But there is a better way off of FDA approved addictive pharma – you don’t have to be a slave. You can feel emotions again and enjoy life. My dream is to open facilities just like Greener Pastures and help as many people as I can.”