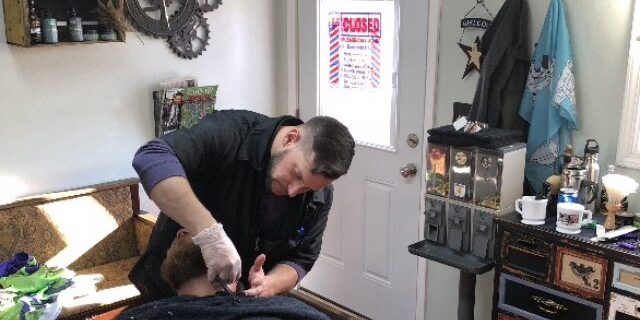 Narcotic-free since then, with no looking back

Raised in the Heartland of America, Chad Padgett became a Mid-Western statistic when he became addicted to Oxycodone and methadone in his home state of Indiana, but then found love and a new career, after replacing the addiction with cannabis and other beneficial herbs.

Oxycodone abuse is now considered an epidemic across the country. According to Friends of Narconon.com, with Indiana’s seven interstate highway systems and 20 U.S. highways, with international shipping off the St. Lawrence Seaway system via Lake Michigan, Indiana has become a drug transportation and distribution hub.

But, like many who become addicted to prescription opioids, 41-year-old Padgett didn’t get his drugs off the black market, they were prescribed for serious ailments by his doctor in the small town of Walton, where he has made his home.

After removal of his spleen in 1990, then his gallbladder in 1992, by fall of 2007, he was diagnosed with acute pancreatitis; leaving him officially disabled. By 2008, Padgett was told he would likely be dead within seven years, from chronic pancreatitis that would lead to diabetes and pancreatic cancer.

“After being put on methadone and oxycodone, then having several endoscopic ultra-sounds with pain block procedures, two endoscopic procedures, then a stint placed in my pancreas, I was advised that I needed pancreatic enzymes and a dilaudid pain pump inserted into my spine,” Padgett shared. The oxycodone was no longer working on its own, so, I was then prescribed methadone along with the oxycodone, with an increase to 90 milligrams of both, daily.”

By 2013, after six years of procedures, with one year left to meet his doctor’s seven year death sentence, and eventual addiction to oxycodone and methadone, Padgett decided he wasn’t going to lay, slowly dying, in a hospital bed for the alleged last year of his life.

The Power of Plants

“That’s when I tried a simple cannabis vegetable glycerin tincture,” he explained. “My Oxycodone intake dropped from 90 milligrams a day to 30 milligrams immediately. I only had a ten day supply of the tincture, and the first day without it I was back to 90 milligrams of oxycodone.”

In Chad’s mind, the experience told him he needed a higher concentration of cannabis-based medicine for continued relief.

“I then obtained 20 grams of high THC full extract cannabis oil and successfully treated my Chronic Pancreatitis, while simultaneously coming off all of the narcotics in a three week period at home.”

Padgett said he’s been narcotic-free since then, with no looking back, as the benefits of cannabis replaced the pain killers, while putting his chronic illness into remission. Important to note, the analgesic effects of the cannabis, along with its anti-nausea properties, quell the harsh withdrawal symptoms associated with transitioning off opioids.

Trouble is, Indiana is not legal for cannabis as medicine, and Padgett could have gone to prison for what’s often referred to as being “illegally healed.”

“Now I’m focused on changing Indiana’s Draconian cannabis laws,” he declared. “I was Indiana’s speaker for Law Enforcement Against Prohibition (LEAP) for a few years, and that allowed me to testify in the Indiana Senate Summer Marijuana Study of 2011; with my testimony quoted in Doug Fine’s book, ‘Too High To Fail.’”

From Death Bed to Healer

Last year, his newfound health changed Padgett’s disabled status, and he went back to school and trained to be a barber. But, his knowledge of cannabis led him to the realization of other beneficial herbs, which led him to receive a diploma as a Master Herbalist.

“I started producing legal herbal tinctures for sale in barber shop where I work in Marion, Indiana,” he said. “Initially I made tinctures from chamomile, sage and plantain – with my main focus on chamomile, as it works great for anxiety, depression, and insomnia – and is also a natural allergy fighter and anti-inflammatory.”

Padgett also shared that some clients have actually switched from CBD oil to the chamomile tincture for insomnia; with others stating they haven’t been as pain free in years after a few days use of the tincture.

Padgett’s line of tinctures include sage for sore throats, as Padgett explained, it’s also a natural antiseptic, helping with digestive issues and depression, as well as menopause symptoms; noting, nursing mothers should not use sage as it will dry up milk production. The Plantain tincture, he said, is used for heartburn and is an antibacterial and anti-inflammatory. He also added that it’s great for bug bites.

“It’s interesting to note, in barber school we learned that when barbering first came to the United States, barbers and herbalists were one in the same,” Padgett noted. “Barbering is personally rewarding, as you are more than just someone cutting someone’s hair – you are a listener, and in my case, a healer. You are also there for a quick laugh or smile, brightening their day.”

Apothecary is the age-old practice of making remedies from plants, and superseded the pharmaceutical industry’s synthetic patents for centuries, globally.

It’s interesting to note, America’s first medical general in the military was actually an Apothecary General, using plants as remedy – including cannabis. Gen. Andrew Craigie was appointed to the newly created position just after the Civil War.

According to the National Barber Museum, the word barber translates to barba, or beard, in Latin. Barber services can be traced back to 6,000 years to Egypt. Barbers in the middle ages not only shaved and maintained beards, they also performed surgery, dubbing them barber-surgeons. This cross-over was pragmatic, as barbers had the sharpest knives, and the supposed skill set to use them.

Eventually, surgeons and barbers were separated, with barbers keeping the right to pull teeth. They also kept the famed candy-stripe poles; representing red for blood, white for bandages, and blue for veins.

According to The Guilds of Dublin, by John Webb (1929), Apothecaries were members of the Guild of Barbers, Surgeons, Apothecaries and Periwig makers. The guild, founded in 1446 by Henry VI, was the earliest Royal medical foundation in Britain or Ireland. Surgeons were added by Elizabeth I in 1576.

By 1747 Apothecaries separated from the guild, with barbers continuing to use plant-based personal care products for their clients. Photos of Apothecary museums show barber razors and apothecary bottles on display together.

A quick search online shows many barbers today not only using the word Apothecary, but also making their own shaving soaps and lotions, using plant-based compounds.

While in barber school, Padgett met his current wife, Kylie, who was an instructor. She also works in the barber shop and is helping him make more products, including topical creams and lotions for clientele.

Padgett waxes poetic on his role as barber and herbalist, knowing full-well a plant saved his life.

“Herbs are on this planet for a purpose, and that purpose is for them to be used just the same as our ancestors did before big pharma cashed in with mass-produced synthetics,” Padgett concluded. “Cannabis has given me my life back, and now that I’m healthy again, I’m able to truly help others heal with plant-based remedies.”

Chad and Kylie can be found at the 5 Star Salon & Barbershop, 504 North Baldwin Ave., Marion, Indiana

He will ship products for a small fee.