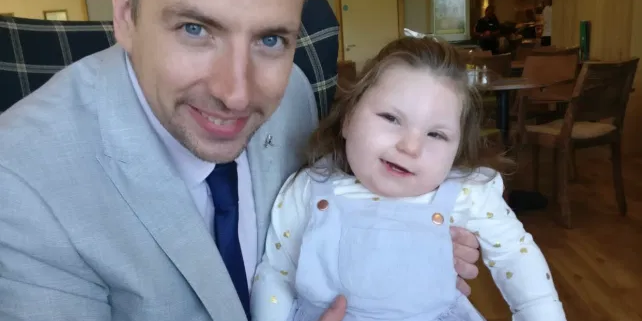 She was born with a severe form of epilepsy that had left her suffering over 30 seizures a day.

Last January, my daughter Jorja became the first child in the UK to be prescribed medical cannabis.

She was born with a severe form of epilepsy that had left her suffering over 30 seizures a day.

By the age of just one, she was on a mix of six different drugs, including powerful sedatives not recommended for children.

But the situation was not improving. Jorja was still suffering seizures that could last up to 17 hours, had been in intensive care twice and spent six months of her life in hospital.

My daughter was unable to even lift her own head and, at one stage, we were told by Belfast Hospital that she was not going to make it.

That moment was enraging and terrifying, but also solidifying – it turned my anger and fear into action. Like any parent, I did not want to give up on her.

I had first heard about medical cannabis from Boston Children’s Hospital when they reviewed Jorja’s care and the case of Billy Caldwell. Then I saw a story of a child in Australia who was my daughter’s age with the exact same condition but was now thriving on medical cannabis.

After speaking with doctors from Toronto – where it was more accessible than the UK and has been legal since 2001 – I decided it was worth a chance.

Jorja’s first prescription was issued by a doctor in London on 3 November 2018 after I persuaded a neurologist at a private hospital. It was then imported from Canada.

The first time we administered the medication I remember being extremely nervous. Not that it would have bad side effects, but because I thought it was extremely unlikely to work.

I was administering the medicine under Jorja’s tongue using a syringe. Rather than treating the symptoms, the medicine works by targeting the human body’s endocannabinoid system, which bonds with receptors in the nervous system and the brain.

What followed were five incredibly anxious weeks, and then miraculously, my daughter’s symptoms started to improve.

Two years later and medical cannabis has given Jorja more than a lifeline. She is now four years old and her seizures have all but stopped.

When they do occur, they last less than a few seconds and she no longer needs her rescue medication – which are fast-acting anti-epileptic drugs that help to stop a seizure quickly before it progresses to a medical emergency – for them to end. 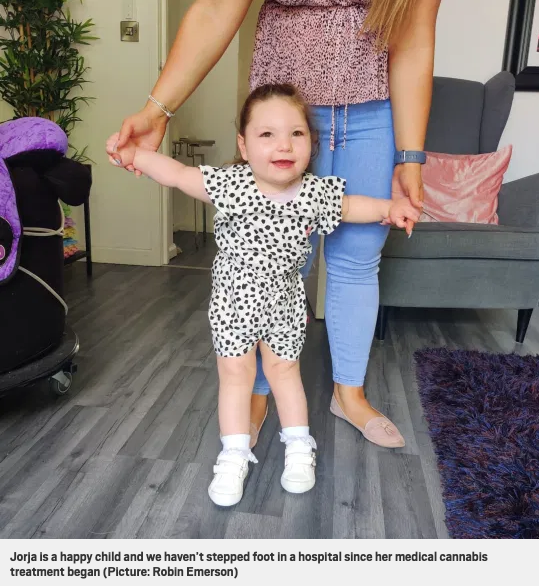 In August, we had an incredibly emotional day when Jorja took her first assisted steps. Her specialist doctor described her progress as ‘absolutely phenomenal’.

In fact, all her doctors agree that if she had not been given this chance of medical cannabis, she would not be with us.

Most importantly, we have been able to slowly wean Jorja off the other medications she was taking, including the sedatives responsible for her comatose-like state. More than anything, this has made me feel like I have my daughter back.

Few people could disagree that Jorja should be on medical cannabis – it has not only saved her life but massively improved its quality. Despite this, we still face persistent issues in the UK.

As things stand, very few people can access it and those that can are those who can afford a prescription from specialist doctors at private clinics.

Last year, draft guidance from NICE was unable to make a recommendation about the use of cannabis-based medicines for diseases like Jorja’s severe treatment-resistant epilepsy, because they believe there is not enough clear evidence that these treatments provide any benefits.

As a result, clinicians are still very reluctant to prescribe it.

This leaves medical cannabis in the UK in a strange limbo.

The medical cannabis industry and a range of campaign groups want speedier and cheaper access, but regulators and clinical bodies want tangible evidence of the safety and efficacy.

Against this backdrop, private prescriptions are rising 20-30% month-on-month for a variety of conditions. Most are for chronic pain and neurological conditions, but also for multiple sclerosis or anxiety and PTSD. Costs can be staggering.

It used to cost me £900 a month until Aphria Pharma in Canada stepped in to provide her medicine free of charge.

They still do today, delivering it directly to my house, but that’s not a solution that can work for everybody. It is thought that 1.3million people in this country are illegally using cannabis for medical reasons.

Clinical trials are therefore needed to bring parity to this market. They represent the most important next step for medicinal cannabis in the UK, but they come at a high cost and they take time. This doesn’t help patients in the short term, but the NHS is a unique system of healthcare, and it means a higher standard is required when it comes to granting national access to medicines.

Of course, I do accept the NHS is right to demand more evidence, which is why I quit my job two years ago to work within the medical cannabis industry to lobby for access for adults and children.

It’s a journey that has led to me being appointed by the board of global cannabis leader Brains Bioceutical, to be an advisor and Head of Corporate Social Responsibility.

We are committed to producing the information required and demonstrating the positive impact medical cannabis can have.

Worldwide, we are one of several companies now conducting advanced phases of clinical trials for issues like epilepsy and alcohol dependency and results are due early in 2021.

Our hope is that our work can lead to trials in so many more areas of healthcare. This can then create an informed conversation around cannabis and serve as point of both trust and education.

With research that can finally prove the efficacy of this medicine, the issue moves to become one of funding.

The NHS must always weigh up the clinical and cost-effectiveness of any medicine, but with a strong, competitive, and regulated cannabis industry, these medicines will become more affordable and accessible.

Doctors in the UK will be desperate to help their patients, rather than block care, but it’s up to our industry to deliver the scientific evidence and actively engage with the regulatory bodies.

Jorja’s story is now a hopeful one. She is a happy child and we haven’t stepped foot in a hospital since her medical cannabis treatment began.

My daughter will always have epilepsy, it cannot be cured and all we can do is try to control it. That is exactly what this medication does.

Taking a syringe of medical cannabis just three times a day has enabled our family to live a fulfilled and relatively normal life. Jorja is now able to concentrate on progressing her development skills.

I am fully aware not everyone is as lucky as Jorja and medical cannabis might not work for everybody. But I hope people can understand why my life now revolves around this medicine and why it’s motivated me to do more. It’s been a life-changer for our family.