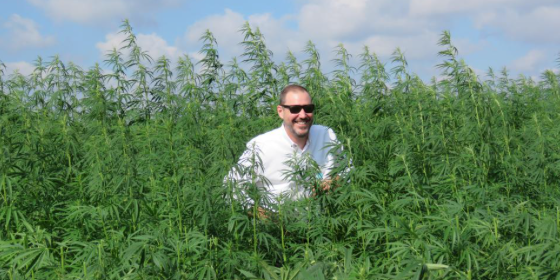 In his Republic, Plato put forth the notion that necessity is the mother of invention. This remains as true today as in ancient Greece.

It also serves to answer the question of why Poland is such a global pioneer for the industrial hemp plant.

Three years ago, I was in Poland on behalf of a client negotiating a license for industrial hemp seed varieties bred at one of the world’s oldest hemp research entities — the Institute of Natural Fibres and Medicinal Plants (IWNiRZ). I stayed at a historic hotel in Poznan, one of Poland’s largest cities, with a population of around 550,000. Having trouble sleeping, I decided to go for a late-night stroll.

Across the street was an old, run-down building, a synagogue built in the early 1900s. During WWII, it was taken over by German soldiers who turned it into barracks and built a swimming pool. Eighty years later, it was just the way they’d left it, a standing reminder of the destruction and violence the war had unleashed. For the Polish people, it remains a symbol of resilience for a country that’s rebuilt itself many times throughout history.

Poland’s contemporary story with industrial hemp begins between the two World Wars, in Vilnius on March 14, 1930. That’s where an experimental agriculture station that would be the precursor to the modern Polish Institute was organized in cooperation between the Linen Society of Vilnius and Stefan Batory University. Among the first experimental research stations in Europe, it pioneered and introduced standardized flax fiber varieties, while also experimenting with other optimal fiber plants and one in particular – industrial hemp.

The Second World War devastated the workshops and almost destroyed the research progress, but one professor managed to save and store valuable breeding materials, ultimately transporting them to Poznań in 1945.

Following WWII, many bast fiber experts relocated to Poland with a mission to rebuild the country’s fiber and wool industries. They re-established their efforts in Poznań where the modern Institute of Natural Fibres and Medicinal Plants resides today. At this time, and under the guidance of Dr. Janusz Jagmin, more than 20 factories for hemp fiber processing — decortication, spinning, and weaving — were constructed as well as research facilities to advance those technologies in conjunction with agricultural and biotechnology infrastructure for plant breeding and industrial hemp agronomy.

Since the resurgence of industrial hemp in the last decade, spurred in no small part by the passage of the 2014 and 2018 Farm Bills in the United States, a number of global companies have approached the Institute of Natural Fibres and Medicinal Plants to license their highly-sought-after hemp fiber and grain genetics.

Since WWII, the Institute has conducted extensive research and breeding programs for hemp, and today has the rights to nearly 100 varieties of the crop. Many of these have sat dormant in lieu of the European’s Union strict policy on allowable THC percentage for industrial hemp, but this has recently changed, breathing new life into these genetics.

Additionally, when the Soviet Union fell, the Institute acquired some of the legendary Russian seed bank. This included varieties from all over the planet, collected during the Cold War while the Soviet Union was expanding its global empire.

Make no mistake about it, Polish hemp genetics will continue to prove dominant. Just this past summer, the Polish hemp variety, Henola, outperformed other leading grain cultivars in a research trial at North Dakota State University’s Carrington Research Extension Center.

While in Poznan, I saw a beautiful picture at the Institute of a massive hemp plant resembling a tree — a reminder of industrial hemp’s importance in the history of Poland. When you strip away the social and political considerations that have kept nations like the U.S. from using hemp as an agricultural commodity, you can see why a country battered by the East and West throughout the centuries would be motivated to recognize and utilize industrial hemp’s almost endless potential.