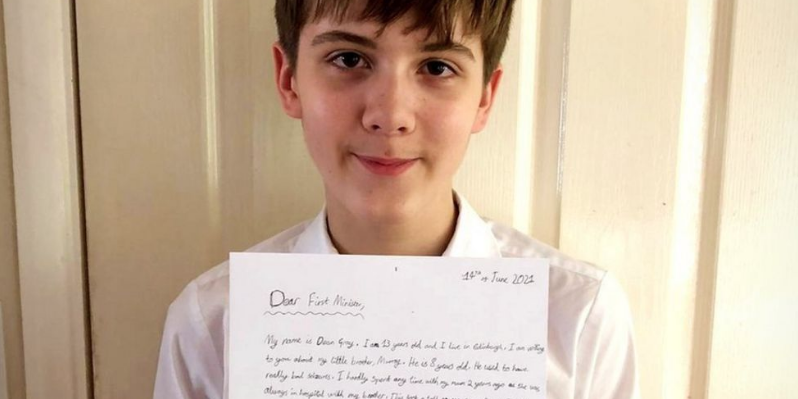 The mother of a boy who suffers life-threatening seizures says she is devastated at Nicola Sturgeon’s response to her son’s plea to make medicine available to his brother.

Karen Gray’s eight-year-old son Murray had hundreds of seizures a day before taking the cannabis-based drug Bedrolite, bought from the Netherlands.

The drug costs £1,300 per month on private prescription.

Murray’s brother Dean, 13, wrote to Ms Sturgeon asking for help to pay for it.

However, the first minister has now responded saying medication has to be proven to be safe before it will be available on the NHS.

Ms Gray, from Edinburgh, says the SNP leader’s letter was disappointing and does not help Murray.

She told BBC News: “We are delighted and grateful that the first minister took the time to write to us – it did seem like a very personal letter.

“But it’s infuriating because she is saying about safety and the NHS won’t prescribe the medicine, but the NHS is prescribing the very same cannabis oil to two other children in the UK.”

Murray suffers from a severe, complex epilepsy called Doose Syndrome. He had multiple seizures every day and his anti-epilepsy medication caused serious side-effects.

Ms Gray said: “Murray was basically dying in front of us in hospital and the NHS couldn’t do anything.

“The only way to take the cannabis oil legally was to get a private neurologist. She writes the prescription because she knows it’s safe for Murray. He hasn’t had a seizure in two years and no side-effects.”

Since legalisation in 2018, only three medical cannabis products have been licensed by the UK-wide Medicines and Healthcare products Regulatory Agency (MHRA).

These are Sativex, which is used to treat severe spasticity in MS patients, Nabilone for chemotherapy-induced nausea, and Epidyolex for rare forms of childhood epilepsy. Only Epidyolex can be prescribed by the NHS in Scotland.

Murray initially responded to Epidyolex but his mother said it eventually stopped working. She believes this is because it did not contain THC, the main psychoactive ingredient in cannabis.

Ms Gray hoped the first minister would help the family get Bedrolite prescribed on the NHS or help to find funding for it.

But Ms Sturgeon replied: “For doctors to make decisions about which medicines to prescribe for their patients, they need to know that the medicines they are prescribing are safe to use.

“In order to prescribe medicines like those Murray currently takes on the NHS in Scotland (which means they will be dispensed for free), we need stronger evidence on their safety and use than we currently have.

“Just now, specialist doctors in the NHS who treat children with epilepsy and similar medical conditions aren’t confident about prescribing cannabis oils, including Bedrolite, until there is better evidence available following a clinical trial.”

She said that the Scottish government had encouraged the manufacturer to take part in future clinical trials of these medicines.

His mother said: “Before, we were constantly in hospital with him, he was in a wheelchair and he was wearing a protective helmet.

“Now, he is able to go to school full-time, he runs about. He is having no seizures and no side-effects, when he was having loads of side-effects with all the anti-epileptic drugs that he was given.”

She added: “It’s just infuriating that there are children in the UK being prescribed the exact same cannabis oil that Murray takes through the NHS. It’s just not fair at all.”

Murray’s private prescription costs the family £1,300 a month, which they rely on friends and family to raise.

Ms Gray fears there will come a time when they cannot afford it.

She said she planned to reply to the first minister to explain the situation further.

Peter Carroll is director of the End Our Pain campaign which is lobbying MPs for financial help for families paying out thousands of pounds on private prescriptions.

He said: “It is touching the first minister replied to Dean’s letter but frustrating that it didn’t address the point.

“Families like Karen’s have proved beyond doubt that the medication is life-transforming. If the issue is safety, then Karen has the best evidence it is safe.

“Our appeal is that now is the time to cut across the bureaucracy and give these families some money to pay for private prescriptions while they work on more widespread prescribing.”