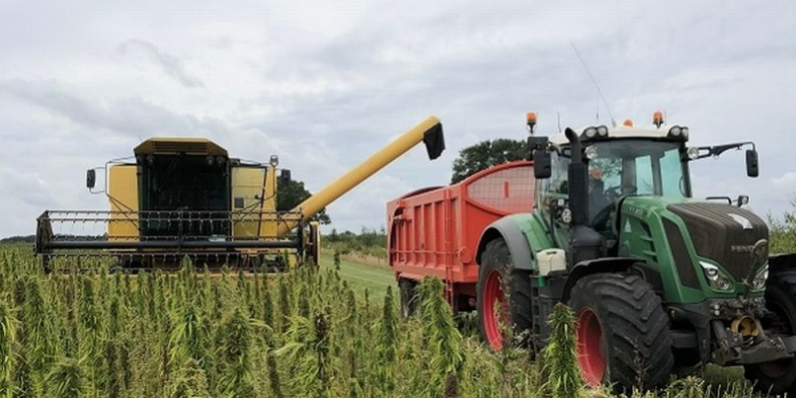 A hemp farming business has launched in Wiltshire with a strategy to revive growth of the crop throughout the South West countryside and reduce Britain’s carbon footprint.

Operating from a mill in Warminster, the British Hemp Company is the first company to process exclusively UK-grown hemp at scale.

Last year the business secured licenses from the Home Office for 12 growing locations throughout the country, including Somerset, Devon, Cornwall and South Wales.

It hopes to process 150 tons of hemp from 700 and 800 acres over the next year and has unveiled a range of nutrition and body care products, from hemp seed oil to hand balm.

Industrial hemp, which is derived from the soft fibre of the Cannabis Sativa plant, is more commonly grown in European countries such as France.

It has a reputation for low maintenance, as it can be grown without being sprayed with agricultural chemicals such as pesticides and herbicides.

Scientific research has found hemp crops to effectively absorb and store carbon dioxide, with the potential to lower greenhouse gases in the atmosphere and reduce the effects of climate change.

Steven Glover, founder and managing director of the British Hemp Company, believes the plant’s hardiness is one of many reasons why the scheme can:

“What we’ve got are farmers being underpaid and consumers who are overpaying. That’s because the distributors and the packers have to generate lots of profit.

“Because we are working directly with the farmers, and because of our positions on the benefits of hemp to society, we pay the farmers the maximum that we possibly can.

“Which means they happily go out into a field that they might have been growing wheat in and grow hemp for us, and get three times as much as they would have for the wheat they have grown the year before.

“One of our farmers who does 50 to 60 hectares for us says that he saves £20,000 in purchasing sprays. And those sprays, as we all know, are extremely damaging for the environment and to wildlife.” Industrial hemp was widely used in the production of paper before wood pulp, but cultivation in the UK reduced from the 1920s after cannabis was outlawed.

Farmers granted a license by the Home Office are permitted to harvest the stems and seeds of the plant. These contain very low levels of the THC chemical found in the psychoactive varieties of cannabis.

‘This is not drugs, it won’t get you high’

Mr Glover, who has a degree in addiction counselling, is hopeful that his venture will help to tackle the stigma surrounding industrial hemp due to its association with the use of cannabis as a drug.

He said: “We need to get the message out there that this is not drugs, it won’t get you high. I think that is one of the challenges we do come across.

“As people become more educated about the benefits of hemp, the stigma just falls away. What we’re promoting is a healthy lifestyle, certainly not getting high.” Mr Glover previously founded the award-winning social enterprise scheme the Severn Project, which went into liquidation in 2019 after experiencing financial difficulties.

The urban farm in Bristol, which produced salad and herbs for the restaurant trade, supported people with drug and mental health problems through employment and training.

The community interest company also grew hemp under licence from a site in Staverton, near Holt in Wiltshire, for medicinal use.

Mr Glover admits he is glad to have put the more labour intensive work of growing salad behind him.

“The thing about salad and herbs is they’re very close to the ground and you end with a bad back after years of harvesting.

“I was always looking at farmers who stick their seed in the ground and then they shut the gate and come back in four months.

“When the Severn project ended, I was thinking to myself ‘what am I going to do?’

“I wanted it to be based on the model of the British Hemp Company – social franchise across the country, people growing all sorts of stuff and then feeding it into a central hub and then distributing it.

“But unfortunately salad and herbs are not sexy. It would be the last thing on the list restaurants would want to bring in.

“Nobody forgets hemp. It’s much more sustainable on a personal level.”