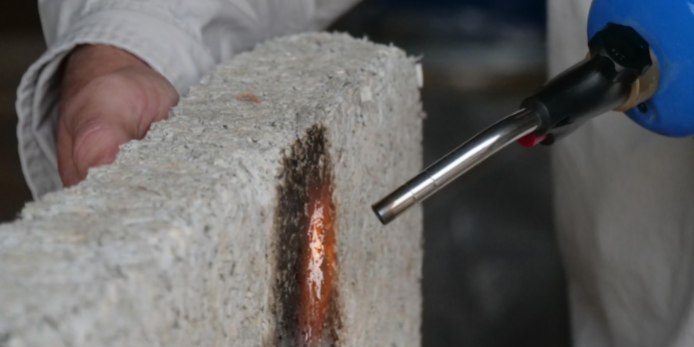 In the wake of the devastation caused by recent bushfires in the south of Western Australia, a much-maligned green plant has risen from the ashes as an unlikely hero.

Due to the social stigma surrounding marijuana, hemp is often aligned with guilt by association.

It is a ruling that is wholly undeserved. The uses of hemp include, but are not limited to food, oil, fibre for clothing and material, agricultural products, and construction.

Given the severity of the fires that roared through the area last week he had no choice but to flee as the brutal bushfire tore through his business.

However, once the smoke had settled, Mr Van noticed his stock of cured hemp blocks had been largely unaffected by the flames, indicating they possess considerable fire-resistant qualities.

“The blocks that were made prior to Christmas have not been touched at all,” Mr Van said.

The hempcrete blocks are made from hemp hurd, the woody centre of the hemp stalk, along with a combination of other materials including lime and water, and take around eight weeks to fully cure.

Mr Van said the knowledge that hemp-based building materials display resistance to fire was not new, but to have seen it demonstrated in a real bushfire scenario was incredibly encouraging.

“We’ve got tests that we do where we use a blow torch that we put on the blocks and the blocks don’t combust,” he said.

The use of hemp for building dates back centuries, but has not been used until recently in Australia since it was banned early in the 20th century.”It’s starting to come back and it’s great to see there is a change happening in the use of sustainable building materials,” Mr Van said.

He said he believed that houses built from hempcrete blocks would have a far greater chance of surviving a bushfire than houses built using other traditional materials.

“It’s a perfect material to be using in bushfire-prone areas,” he said.

Mr Schmidt explained that fire resistance was not the only property that made hempcrete an attractive alternative to conventional building materials.”There’s also its insulation capacity and the fact that it breathes, it won’t contain mould, and the acoustics in a hemp house are amazing,” he said.

“It actually absorbs carbon rather than exudes carbon such as [materials like] concrete.”

In Mr Schmidt’s opinion, the primary reason why hemp was not regularly used in the building industry is the current cost of production.

“The problem here is the chicken and the egg factor,” he said.

“There is a requirement of significant investment in infrastructure to be able to make the product more economically accessible.”

In the meantime, however, those in the hemp industry say they would continue to sing the praises of the vilified plant that brought hope in a time of significant loss.

Reflecting on the fire, Mr Van said “to actually see this [bushfire resistance] happen was really the silver lining in this incident for us.”

“The pallets have burned but the blocks themselves did not, which is a great story for us,” he said.