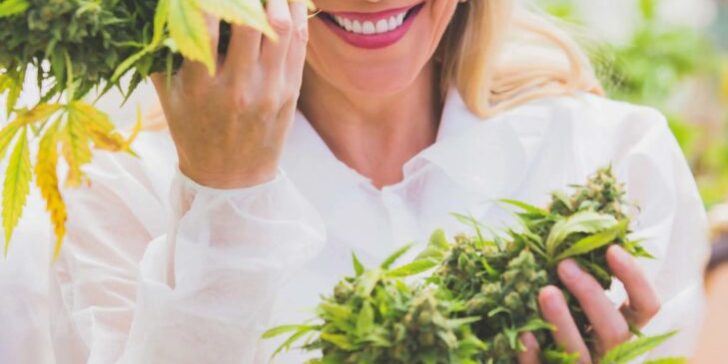 My therapist rolled a joint for me and had to show me how to smoke it, but after three puffs something happened. I started laughing.”

Cheryl Shuman is a big personality. She has been called the First Lady of Cannabis and the Martha Stewart of Marijuana and her own publicity labels her as a ‘Public Relations powerhouse’. On the face of things, she is the epitome of the American dream, a person who has risen from extreme poverty to rattle the gates of Beverly Hills, accumulating the trappings of wealth and celebrity along the way.

To say that Cheryl Shuman has had a colorful life is an understatement. For all the highs there have been intense lows, both physical and emotional. On more than one occasion she has stared death in the face and come out the other side, stronger and more determined. She is known around the world because of her association with cannabis and yet she never even tried it until she was in her mid-thirties.

As the founder of the Beverly Hills Cannabis Club she is perhaps the most glamorous activist you will ever meet. Google her and you will find her driving Ferraris and hanging out in ostentatious places – and when she walks into a room, heads naturally turn. She fully appreciates the power of celebrity and it has been her ability to harness this power that makes her such a potent – albeit unconventional – activist for cannabis in the social media era.

She established her celebrity credentials early in her career, as one-time personal optician to Michael Jackson and the optician to the stars who kitted out Arnold Schwarzenegger with his distinctive biker shades in the 1984 film Terminator, playing a part in turning Arnie, not to mention cyborg assassins from the future, into pop cultural icons.

As well as having a black book bursting with celebrity friends’ numbers, Cheryl is also a very successful businesswoman. She’d made her first million by the age of 21, off the back of a national TV show and as optician to the stars, more success came from having a show on the QVC shopping channel. In her present business Incarnation she has been blazing a trail across the Green Rush landscape that has accompanied cannabis legalization in the USA.

Weed World caught up with her in Prague to discover more about her work with cannabis and the integral role it has played in her very eventful life. One thing that strikes you about Cheryl very quickly is just how personable she is and her ability to connect with people which, one suspects, has much to do with the fact that she has seen the view from the very top, but also from the very bottom.

The celebrity trappings of Cheryl Shuman Inc. are a world away from where she started out, born as she was into a farming family in the rural region of Appalachia, one of the poorest counties in America. One of her earliest memories is eating mustard sandwiches because there was so little food available at home. Says Cheryl, “Forbes magazine did the first big feature story on my work with the title “Beverly Hillbilly” Some people thought I should be angry and insulted by the title. I’m very proud of my humble beginnings and believe strongly that the American Dream is still possible for everyone that has the passion and drive to make things happen and become successful.”

Her first encounter with weed came as a 34-year-old soccer mom (albeit a glamorous one) with two young daughters in the mid-1990s. It was her therapist who first recommended she try weed. “I was in a very bad time of my life,” she explains. “I was suffering the effects of PTSD after being sexually assault by a client. I had been prescribed a number of prescriptive drugs which had stabilized my mood but I was walking around like a zombie. My therapist said to me one day ‘don’t take this the wrong way but you really need to smoke a joint’.”

She laughs as she describes her initial reaction of shock. “I had always been a goody two shoes. I had never drunk or smoke. At this stage in my life I was a soccer mom, a member of the PTA, just as straight as you could be. My therapist rolled a joint for me and had to show me how to smoke it, but after three puffs something happened. I started laughing.”

That day changed her life…. for the first time. She still can’t roll a joint herself (“especially not with these nails,” she laughs), but for the next two years used weed to cope with her PTSD issues. “I was a different person, or should I say I became the person I used to be. I remember my daughters were so happy, ‘we got our mum back’ they’d sing.”

Enriched by this experience, she felt the first stirrings of desire to actively promote the medicinal benefits of cannabis, motivated too by its widespread use amongst patients swept up in the terrifying AIDS epidemic which was ravaging the country at the time. “I began to research the history of the plant,” explains Cheryl, “and realized that we had been lied to by the government about the benefits of cannabis as a medicine. It wasn’t ‘The Devil’s lettuce’ or the evil that propaganda campaigns like the Reefer Madness movie claimed. I became obsessed with working politically and with media strategy to bring this issue to the forefront.”

Part of this strategy was founding the Beverly Hills Cannabis Club in 1996. The club still grabs headlines around the world thanks to its celebrity association and high style – such as offering $150,000 vapes and $500 Cannagars (cigars packed with cannabis) for sale! However, the club also provides consultation on legalization and mentors young businesses (and especially those headed by women) looking to enter the cannabis market.

Fast forward from this first epiphany to 2006, when cannabis changed Cheryl’s life for the second time. In fact, it saved her life. She was diagnosed with ovarian cancer (the silent killer which develops with few obvious symptoms and kills over 4000 women a year in the UK). “My doctors told me that I was too weak for chemo and radiation. I was also told that all I could do was take it one day at a time. I was also told to ‘wrap things up and tie up all loose ends’ because they didn’t expect me to make it for more than 3 months.” However, to continue the theme of the life’s deck of cards metaphor, fate dealt Cheryl a game changing hand…

A chance meeting with an old school friend via dating site Match.com (“I hadn’t got round to cancelling it!” she confides) alerted her to the anecdotal evidence that CBD-rich cannabis, strains Cannatonic and Harlequin were being hailed as providing cures for cancer patients. Further research revealed the work of Rick Simpson and Dr Raphael Mechoulam in Israel who had been working with medical cannabis since the 1960’s. “For the first time since my diagnosis, I felt a glimmer of hope,” she says, her eyes welling up as she talks about it. “I felt like I had no choice but to go for it.” Her course of action was radical. She checked herself out of the hospice she was in (“The doctors told me I was crazy.”) and decamped back to the family farm in Ohio to embark on a radical program of self-treatment.

“My high school friend and daughter took care of me. I had not been able to eat anything in many weeks, so my ability to even swallow anything was challenging. So, we started with a joint, which was all I knew about cannabis consumption at that point. We also focused on getting my body as alkaline as possible. Then we tried juicing and a raw food diet protocol to see what I could tolerate.

By the 60 day mark I was using cannabis CBD oil and infused food which helped me get stronger and I was able to go on walks and do some yoga. I didn’t know if I was being healed or if I was just convincing myself that I was getting better. By the 90 day mark I was able to drive, walk, eat and work from my computer virtually. I saw my doctors who were literally in shock when they saw me because they didn’t expect me to actually live this long.”

Not only in remission, incredibly Cheryl felt well enough to go back to work! She had had an epiphany too. She would return to California and set up a pot farm so that others could benefit from the medicinal qualities of the cannabis plant. “I sat my children down and explained to them that even though this would be difficult and challenging that I was committed to making it happen. Naturally, my friends were worried that I was setting myself up for trouble. But I knew it was something I had to do.” Back in the Golden state, she rented a 15-acre farm and began to grow. “Because of my cancer diagnosis I was a federally exempt patient and had approval to grow more than the normal six plant allowance for patients. So, I decided to just go for it and planned for a 99 plant grow outdoors.” Today Cheryl’s ‘Pot farm’ is still going and now covers 68 acres.

The second epiphany to come from her brush with death was to get serious about her activism. She was inspired by the experience of New York socialite, Pauline Sabin, who was a leading campaigner for the end of alcohol prohibition which lasted in the USA from 1920 – 1933. Famously, Pauline Sabin, drove the fight to end prohibition by assembling her rich socialite friends together for lunches in order to spread the word. Cheryl ran through her own black book of contacts from the world of celebrity and business, signing up members to probably one of the most exclusive cannabis clubs the world will ever see – The Beverly Hills Cannabis Club.

In addition, she reached out to celebrity friends such as Melissa Etheridge, Whoopi Goldberg, Danny Glover and Bill Maher urging them to speak up and speak loud. Meanwhile her frequent appearances on primetime TV shows hosted by the likes of Katie Couric, Dr Sanjay Gupta and Dr Phil helped to strip away the stigma of cannabis and contributed to changing public opinion, setting the foundations for the legalization that has exploded across US states in the past few years.

Although she has won many battles on this front, she continues to tirelessly campaign for reform for all. “The drug war is still on”, she says, the tender tones of her life story tales suddenly replaced by a steely conviction. “Just as I got out there and told my story, other people need to do the same. You have to tell these stories and make them heard. Talk to people, build networks and contacts.” She pauses to take a sip of water, before flashing a million-dollar smile. “Never forget, that change is always possible and there is great power in numbers. You just have to get out there…”